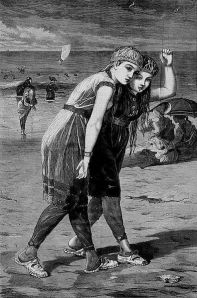 Bathers at the Beach by Winslow Homer

In the 1800s, popular American magazines such as Harper’s Weekly and Leslie’s Illustrated had their pictures printed from original hand etched printing blocks. This was before modern 20th century reproduction technology, so all the prints in publications were made ‘by hand,’ the same way an original Picasso or Rembrandt was made. One of the artists/printmakers for Harper’s Weekly was Winslow Homer, who later became a world famous painter. Today, he is commonly ranked as the greatest American painter of the 19th century. As Harper’s Weekly was a popular nationally distributed magazine, original copies are plentiful and relatively inexpensive, but a Winslow picture inside or on the cover is consider an original artwork by him.