Amedeo Modigliani in his studio

Amedeo Modilgiani was an early 1900s Italian painter who worked primarily in Paris.  He is influential for his African-art influenced elongated portraits of Parisians, often fellow artists and other people he knew.  The following are some interesting facts about him

* In a highly anti-semitic France, Modigliani fearlessly and proudly told people upfront he was Jewish.

* He was the quintessential bohemian and starving artist.  He was a colorful and restless personality in Paris’ art district, dirt poor,  abuser of drugs and alcohol, friends with other artists including Picasso.  The Paris shack he lived in was said to be so cheap, that one could see the sunlight all the way through it on a sunny day.

* He was said to be charming, witty and learned when sober, but unruly and angry when drunk.

* As with many artists, he tried to sell his paintings to tourists in public.  One woman who had just bought a painting, asked him to sign it because she had heard paintings were worth more when signed.  The rebellious and irascible Modigliani wrote his name in huge letters across the middle the painting, intentionally ruining it.

* As a poor artist, Modigliani often paid his landlord with his paintings.  One disgusted landlord angrily lined his birdcages with the paintings, only to see the value of Modigliani’s art skyrocket in is lifetime.  Modigliani’s paintings are today worth millions of dollars a piece.

* As with many now famous artists, Modigliani did not become famous and his art did not gain value until after his death.

* Modigliani died at 35 of meningitis, a viral infection of the brain.  His pregnant girlfriend,  Jeanne Hébuterne, was so distraught that she jumped out of a multi-story window killing herself and the unborn baby.  Many of Modigliani’s portraits are of Hébuterne.  She also was a painter. 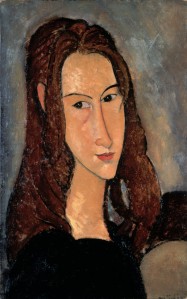 * Modigliani was also a sculptor.  He was once seen, high on hashish (his favorite drug), on the ground hugging his statues.

* Modigliani’s favorite book was ‘Les Chants de Maldoror’ (The Songs of Maldoror) by Comte de Lautreamont, and he carried a copy in his coat pocket.  Lautreamont was an obscure French-Uraguayan student who died  in his mid twenties in the 1870s.  Originally thought to be the product of a madman, the book is now hailed as a masterpiece of early surrealism, known for its corrosive if colorful imagery.  The Maldoror of the title is a creature in Paris who openly rebels against man and God, and the book was written in an ahead-of-its-times collage style.